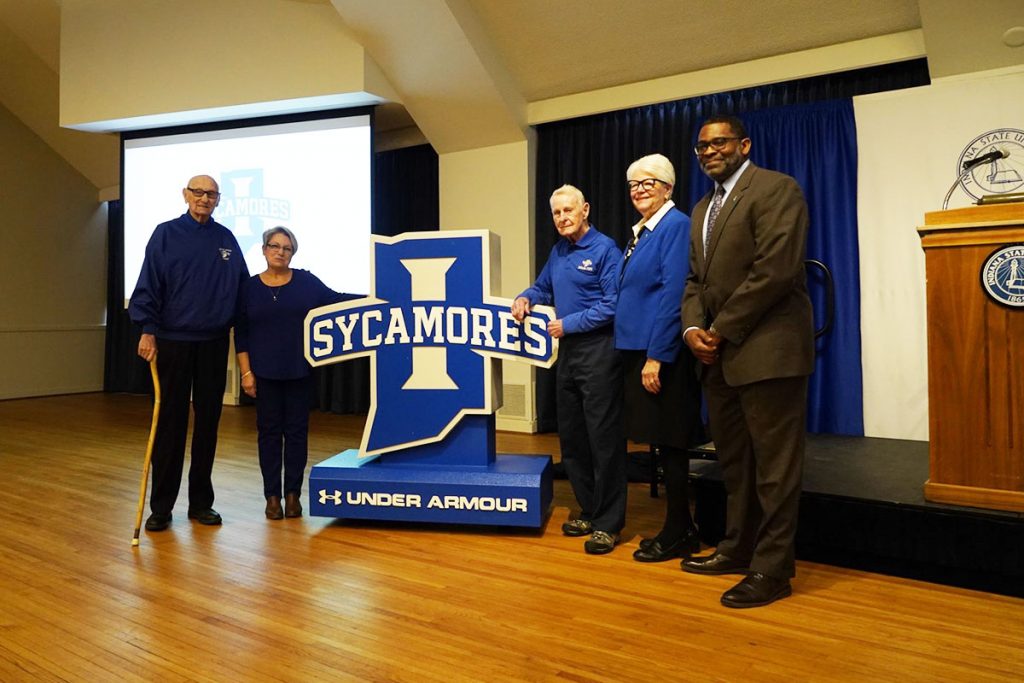 A new day is dawning in Terre Haute. Indiana State Sycamore athletics, a tradition forged by legends like World Champion Larry Bird, Hall of Famer Melanie Boeglin and Legendary basketball coach John Wooden begins a new era in its rich history. A program with a storied past will bring forth a modern brand to help write the story for a new generation of Sycamores.

Beaming with pride for the state it calls home, the Indiana state outline remains the cornerstone of the athletic brand. A typeface that projects power and tradition, arced to honor the emblem that represented this fabled program for more than three decades. The two elements united against an “I” so there’s no mistaking where the Sycamores call home.

Welcome to the future of the Indiana State University Sycamores. March On!

“This is an exciting day for Indiana State University and the fans of our teams, Dr. Deborah Curtis said. “We have a modern logo for Athletics that projects power, respects tradition, and honors our great state. The updated logo will engage a new generation and energize the Athletic Department brand. But the current logo isn’t going away. It remains as a vintage mark. Baseball will continue to use the interlocking ‘I-S.’ After several months of careful planning and input, we’re truly getting the best of all worlds.”

The press conference was held as part of the beginning of the Sycamore Basketball postseason. The new marks will debut on the Under Armour shooting shirts at Arch Madness 2020, to be held from March 5-8 at the Enterprise Center. This is the 30th anniversary of the State Farm Missouri Valley Conference Championship being held in St. Louis.

“This is an exciting day for Sycamore Athletics as we position ourselves for the future while also paying respect to the rich tradition at Indiana State,” Director of Athletics Sherard Clinkscales said. “It is vital that we continue to move our brand forward in a more consistent manner and these refreshed logos will held accomplish that. More importantly, this rebrand pays homage to all of those who laid it all on the line for Sycamore Athletics.”

In the spring of 2018, Indiana State University embarked on a mission to overhaul the athletics brand, primarily through the development of a new family of marks and typeface. In partnership with Old Hat Creative, based in Oklahoma City, Okla., the project consisted of the development of a new primary mark, a family of wordmarks for “Indiana State,” and a new primary typeface, all of which will replace the existing marks moving forward.

The logo that has been in place since 1988 will remain as a vintage mark. The interlocking “I-S” mark will continue to be utilized for baseball only. The “Indiana State” script will continue to be used on the Sycamore Track & Field uniforms only in tribute to the legacy of longtime program coordinator John McNichols.

“It was such an honor to be selected to design a new family of logos for an athletic program with such a storied tradition,” said Zac Logsdon, CEO and founder of Old Hat. “We did a lot of research among fans, alumni and donors to determine what was most important to them about the brand so we could carry that over into the new set of marks. We wanted to honor the past while at the same time giving Indiana State a modern identity that will represent the Sycamores for years to come.”

The logo refresh also comes ahead of Indiana State University’s Give to Blue Day which will be held on March 11. Give to Blue Day is a 24-hour fundraising and engagement opportunity for Indiana State University students, faculty, staff, parents, alumni, and friends. On March 11, Sycamores nationwide will be donating to various university units, including the Athletics Department as well as the individual sports programs.