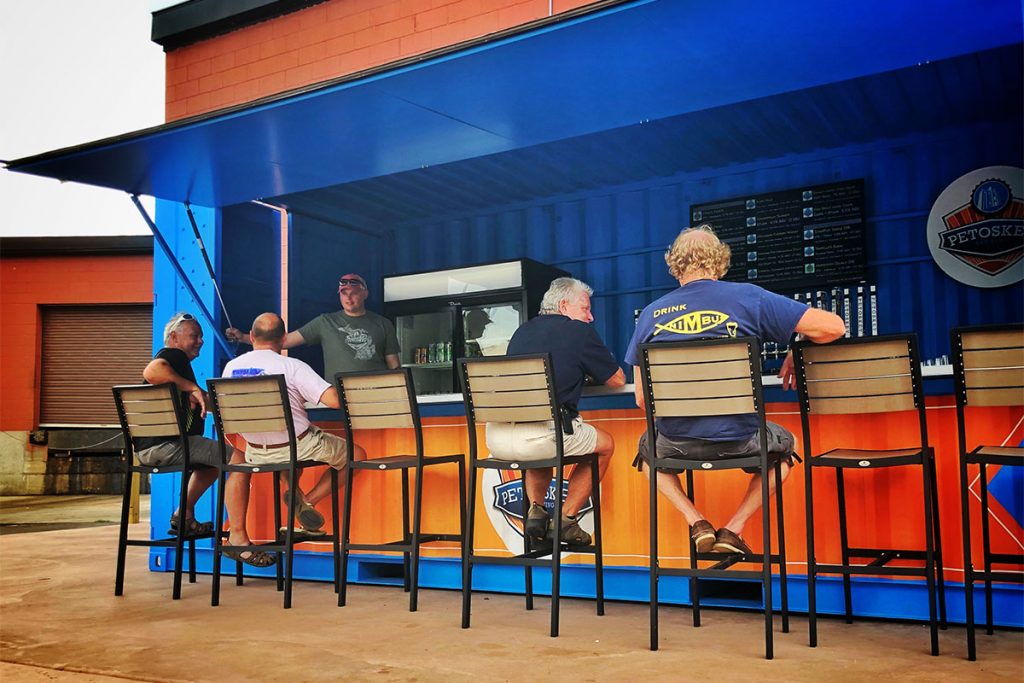 In 2012, after completely reviving the city’s historic “Old Brewery” closed since 1915, Petoskey Brewing Company owners, Patrick Dowd and Lou Gostinger, began searching for another way to modernize the iconic Northern Michigan landmark and engage more customers with their unique style of craft beer. The partners brewed up an idea to create an outdoor beer garden and collaborated with Britten’s BoxPop team to produce a custom, mobile, outdoor shipping container bar for microbrew lovers.
Britten designers visited Dowd and Gostinger at the brewery site then drafted detailed, 3D renderings of the taproom based on the partners’ vision and unique equipment needs. To transform the 10’x 20’ shipping container, BoxPop’s fabrication team started by adding a raised awning and doused the pop-up in the brewery’s lively, blue and orange trademark colors. A digital screen menu, Kegorator taps, countertops, fridge, and two large logo decals affixed to the container completed the branding of this unconventional and fully functional bar. Just weeks after being given the word “go,” BoxPop delivered and installed the taproom on-site and in time for a big reveal during Petoskey’s July 4th festivities.

“Our new BoxPop beer garden is an absolute hit,” said Dowd. “Not only was it a fun and creative project, but the turnaround time was quick and the price was just right.” Little did Dowd know that two years later, mobile open-air taprooms would not only be a trend but a necessity for microbrewers in the post-COVID era of social distancing. Now, one of the first pop-up taprooms the BoxPop team ever designed is still onsite and safely serving hundreds of thirsty customers.